skip to main | skip to sidebar

Further to my visit to The Golden Lion on July 7, 2008, I am told that it has changed hands and that both beer and service has improved beyond recognition. I'll have to get over there and see for myself, especially now that the weather has improved. Watch this space.
Posted by papastonch at 01:20 6 comments: 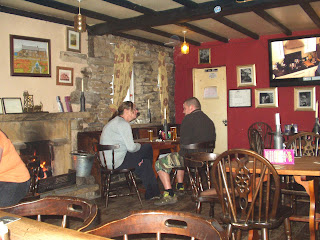 Apparently the people who turned up at the legendary Tan Hill Inn for a New Year bash were unfortunate enough to get snowed in. They were "stuck" there for three days at the highest pub in Britain and had to make the best of it. The manager charged them ten pounds a night (what a bargain!) to doss down in the pub and roaring fires were kept going twenty four hours of the day. The picture shows the fire they keep going in the summer (it's necessary, believe me) in the barn-end room.
Each day, volunteers went out with the manager to dig out and service the generator.
And, despite their best efforts, he didn't run out of beer! I cannot think of a better "misfortune".
Posted by papastonch at 11:44 3 comments:

So my son Stonch has quit writing his beer blog. Well, I can understand it, as keeping up with these things is very hard when you're a busy man. Actually, he told me of his intentions when he came "home" for Christmas and we were having one or two (it turned out to be eight) beers at the Big Lamp Brewery. Like all sensible fathers whose son has reached 21, I made no attempt to advise him. He may be right - he has got a lot out of the experience, but maybe it's time to move on.
Reading the comments on his "last post", by the way, I feel I must respond to "Anonymous" who refers to my son as a "deluded count". Not only are you unable to spell, mate, but you are totally wrong. I assure you that my son has no titled people in his ancestry.
Posted by papastonch at 03:23 5 comments: 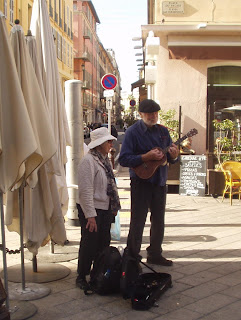 One last point I'd like to make about the street people who infest the city of Nice - I saw the best busker I have seen for many a long year there.
She was an old lady who sang without any form of amplification in the market place. She was accompanied only by a guy in a beret, who plonked away on string instrument (I'm no good at identifying such things) to very good effect.
Altogether, they were an excellent combination and the marketeers applauded with the public at the end of each song. They performed for about an hour, which I thought to be the limit of the old lady's strength and repetoire, as she really put heart and soul into such classics as "Je ne Regrette Rien", then gathered up their money and left with dignity to an all-round peal of applause.
What a contrast to the buggers who make a damned nuisance of themselves in our High Steets, blasting out amplified crap to annoy passers-by.
Posted by papastonch at 02:27 No comments:

The Streets of Nice 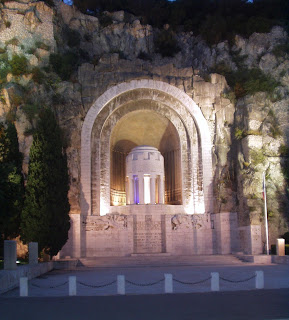 Someone recently told me that Ralph McTell's famous folk song "The Streets of London" was originally written about Paris. Well, all I can say is that neither London nor Paris has got anything on Nice for the number and variety of "street people". The mild climate and the number of nooks and crannies in which to doss has attracted bums and stiffs from all over Europe. One favourite spot for dossers is round the side of the rather magnificent War Memorial garden (pictured), so much so that the place stinks permanently of piss.
Every day as I went from the flat I had rented to the beach, I passed an old bag-lady who had made herself a regular home on a street-corner out of old junk, umbrellas and broken deck-chairs!
All very picturesque and you might be inclined to sympathise, but not if you've paid two or three hundred thousand euros for a flat with a view and what you get is a permanent street encampment outside your front door and visible from your balcony.
On the promenade I passed a lovely public garden with palm trees, flowers and benches but it was NOT available to the public, having been completely taken over by a pair of tramps who had spread themselves and their belongings over all the benches, even hanging their clothes up in the trees as a wardrobe. Once during the week I spent in Nice I witnessed the Police moving them on, but they were back within hours.
It's little wonder we sometimes hear of "police brutality" in dealing with these people. It must be very frustrating for them.
Posted by papastonch at 05:41 1 comment:

It's nice in Nice 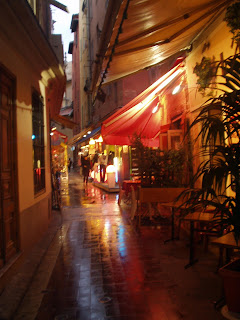 Recently, Marion and I rented an apartment right in the centre of the Old Town in Nice. I was on the Garibaldi trail (he was born there), indulging my fascination with that greatest of all heroes of the 19th century. The Old Town was everything we could have wished for, with wonderfully atmospheric narrow streets, full of life. It was a treat to wander around in the evenings, down the narrow alleyways brightly lit by shops of every description.
One thing that didn't suit me, however, was the price of the beer - 6.5 euros on average for a miserably small glass, not even a pint! Even during the "happy hours", the price only fell to 4.5 euros. And yet the amazing thing was how many drunks there were. Each night inebriated revellers reeled around the streets shouting and making a nuisance of themselves. How do they afford it? Barely had the last of the revellers cleared off than the street cleaners arrived, whistling and rattling about as they hosed down the roads and pavements. Very necessary no doubt, not only to clear up after the drunks but because Nice is a town of not-too-conscientious dog owners.
No, Nice is not the place to go if you want a peaceful night's sleep, but it's a great place nonetheless. Who wants to sleep anyway?
Posted by papastonch at 11:21 2 comments: 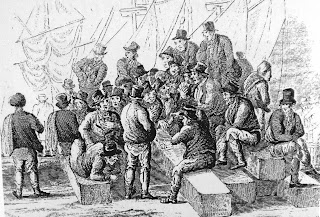 A year or two ago (when I felt leaner and fitter) I followed The Keelman's Way, a cycle track along the south bank of the river from its mouth to West Gateshead, a distance of about eight miles. I passed one or two interesting pubs along the way, including the exotically-named Elephant on the Tyne, a subject I will write upon in the future.
The keelmen were a bunch of hard-drinking bargees who punted the coal down the shallow river to the waiting ships in centuries gone by and the pubs along the riverside saw many a wild "spree" (as they called a boose up) when the keelmen decided to celebrate. The engraving opposite shows "keelmen gathering for a spree". Keelmen's sprees were invariably accompanied by the music of a fiddle or the pipes, and ferocious stamping by way of participation.
I have read a report in an 1805 copy of The Newcastle Star which records that the publican of the Dunston Tavern was "obliged to call out the Watch for the stamping and ranting of numerous keelmen did threaten the integrity of his premises". Too late, the Watch arrived to find that the tavern had collapsed into the river, drowning two of the keelmen. Perhaps this is the origin of the expression "to bring the house down"!
If you want to know more about the keelmen and their unique way of life, you might do worse than to buy one of my little booklets, as featured in the left-hand column of this blog (oh well, it was worth a try...)
Posted by papastonch at 07:40 No comments:

I accept samples from Brewers/Distributors for review.
Email davidbell21@hotmail.com for mailing address.
Your product will be listed below.

David Bell is an author whose books have been published in the U.K and Italy. His latest book "The Folk Doon on the Kee" (ISBN 0-9552392-0-6, 48 A4 pages, many illustrations, price £5.99) can be ordered through all bookshops or post-free direct from the author by contacting email address davidbell21@hotmail.com 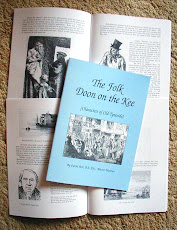 The author has also produced a series of self-published booklets on various topics, some of which have been the subject of articles in the blog. These booklets, pictured below, are available at £2 each, inc P&P to U.K addresses, direct from the author by contacting his email address.
davidbell21@hotmail.com 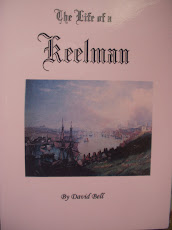 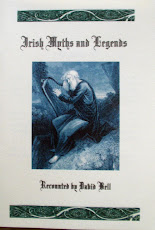 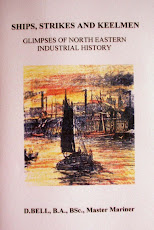 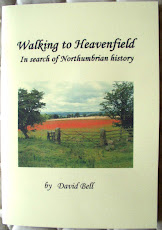 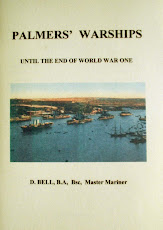 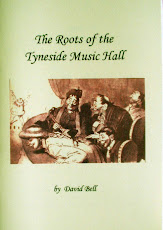 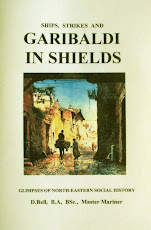 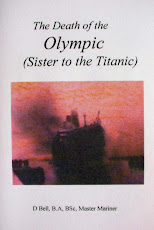 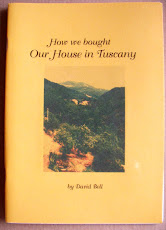